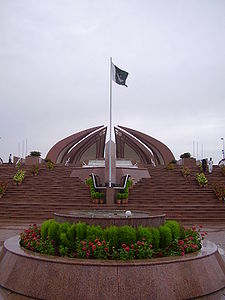 Pakistan's independence day (also known as Yom-e-Istiqlal [Urdu: یوم استقلال]) is observed on 14 August, the day before Pakistan was made an independent country based on border lines created by the British during the end of their rule of India.

Pakistan became an independent country in 1947. The day is a national holiday in Pakistan. The day is celebrated all over the country with flag raising ceremonies, tributes to the national heroes and fireworks taking place in the capital, Islamabad. The main celebrations takes place in Islamabad, where the President and Prime Minister raise the national flag, the leaders highlight the achievements of the government, goals set for the future and in the words of the father of the nation, Quaid-e-Azam, bring "Unity, Faith and Discipline" to its people.

Islamic Republic of Pakistan (Urdu: اسلامی جمہوریۂ پاکِستان) is a sovereign state in South Asia. It has a 1,046-kilometre (650 mi) coastline along the Arabian Sea and the Gulf of Oman in the south and is bordered by Afghanistan and Iran in the west, India in the east and China in the far northeast.

Pakistani society is largely hierarchical, with high regard for traditional Islamic values, although urban families have grown into a nuclear family system because of the socio-economic constraints imposed by the traditional joint family system.

The variety of Pakistani music ranges from diverse provincial folk music and traditional styles such as Qawwali and Ghazal Gayaki to modern forms fusing traditional and western music, such as the synchronisation of Qawwali and western music by the world renowned Nusrat Fateh Ali Khan. In addition Pakistan is home to many famous folk singers such as the late Alam Lohar, who is also well known in Indian Punjab. However, majority of Pakistanis listen to Indian music produced by Bollywood and other Indian film industries.

State-owned Pakistan Television Corporation (PTV) and Pakistan Broadcasting Corporation were the dominant media outlets, but there are now numerous private television channels. Various American, European, and Asian television channels and films are available to the majority of the Pakistani population via private television networks, cable, and satellite television (43 million Pakistanis have satellite television).[168] There are also small indigenous film industries based in Lahore and Peshawar (often referred to as Lollywood). And while Bollywood films have been banned from being played in public cinemas since 1965 they have remained in popular culture.