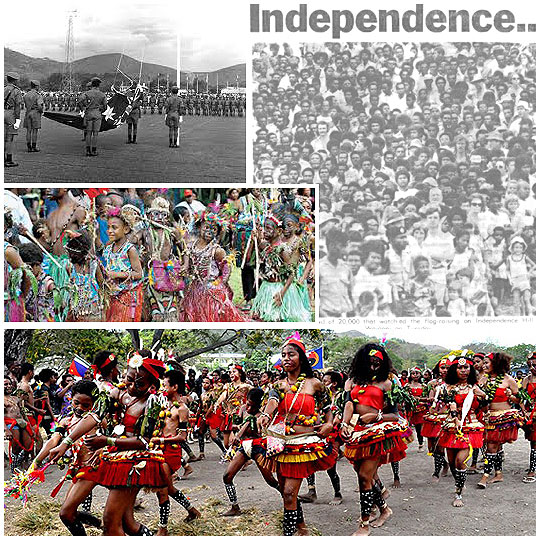 After being ruled by three external powers since 1884, Papua New Guinea gained its independence from Australia in 1975. Elections in 1972 resulted in the formation of a ministry headed by Chief Minister Michael Somare, who pledged to lead the country to self-government and then to independence. Papua New Guinea became self-governing on December 1, 1973 and achieved independence on September 16, 1975.

On the morning of the first day of Independence for Papua New Guinea (September 15, 1975), flag raising ceremonies took place throughout the nation. The ceremony in Port Moresby was conducted at Independence Hill overlooking the main city centre. International guests in national dress and western dress assembled for the occasion. Former Administrators D.O. Hay and J.K. Murray, and former Minister for External Territories C.E. Barnes were among the spectators. Prince Charles unveiled a plaque to mark the site of the new National Parliament building.

A military band, accompanied by the percussion of a thousand clicking camera shutters, played “Sunset” as Warrant Officer Ibor lowered the Australian flag, folded it and handed it to Sir John Guise, the Governor-General of Papua New Guinea. That marvelous sunset, together with Sir John Guise’s words “We are lowering this flag, not tearing it down” made for a memorable occasion. Tears fell for many, a moment they shall never forget, as the Australian flag came down for the last time.

Celebrations for the Independence Day

Celebrations held on the occasion was usually held in Port Moresby, whereby the National Capital District Commission (NCDC) sponsor and lead organization of the celebrations at Jack Pidik Park at 5 Mile which was attended and participated by PNG citizens of all walks of life including school students, women’s group and the disciplinary forces (Police, Army and Warders).